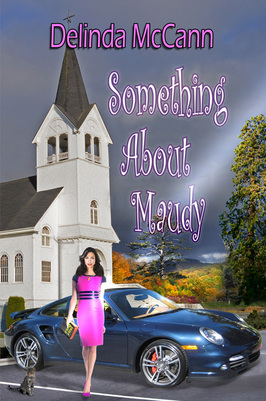 Blackfish United Methodist Church was dying when Pastor Maude and her cat, John Wesley accepted the assignment to the church and moved into the parsonage.  The elderly congregation did not want change and Maudy represented radical change with her navy-blue Porsche and background as an actress.

Before Rev. Maude had completely made peace with her congregation they all became embroiled in a tumultuous riot of assault, floods, and burglaries while the threat of closure hung over the small congregation.

Maude and John Wesley together with Ralph, Maude’s burly boyfriend eventually sort out the wave of challenges while giving birth to a vision of how contemporary small town church can serve its community.

******
From the characters:
“I wondered if my congregation would faint if they knew what I was doing?  I snorted and thought they would faint just after they wrote a letter to the bishop” –Maude

“She’s too pretty to be a pastor.  She’ll be attracting all the men.  I heard she used to be in movies.” – Trisha Brinks

“I think there is something odd about her Porsche.” – Timmy, restaurant owner

“She keeps food in her refrigerator past the pull date.” – Jean Bruce

“Who does she think she is opening the church as a shelter during the flood?” – Margery Sidell

“Listen folks, you can’t use this building this morning.  My suggestion would be to call Pastor Maude.” Officer Ryan

“Do you think it was her first husband who beat her?” – Darlene-the-waitress

“That boyfriend she has now is a sexy devil.” - Shirley

“I think her son is behind all these break-ins.  You know how it is with preacher’s kids.” - Anonymous

“We told her not to let the funeral home move the communion table back for a funeral, and she let them do it!” – Alva Brinks

“I heard her laughing in the hardware store with Elaine Miller.  You’d think she’d know enough to avoid someone like Elaine.  Why Elaine isn’t even married to Ed.” – Louise

“I heard that she is marrying a woman with orange and purple hair.” –Elma Miller

“I guess I can buy dinner for the one person who knows what to do when something like this happens.” – Total Stranger

“She has no respect for the way we’ve always done things.” – Margery Sidell

“You know, she’s not what I expected, but she’s our best bet for keeping this church alive.” –Larry Bruce

Where to buy this book

I’ve always considered carpets, if I thought about them at all, to be rather boring.  I’m talking about rugs here--not the most exciting objects in the world.  We can all continue to learn, and I learned something about carpets one Monday at City People’s Nursery in Seattle when a rug decided to change the course of my life and became animate.

I went to Seattle on a Monday to recover from a stressful weekend.  The first sign that I was about to have a fantastic day occurred in a little store near the nursery called Missi Lu.  A Sale sign lured me into the shop where I found a charming, trendy jacket and an A line skirt suitable for work.  I checked the tags and was thrilled to the tips of my toes.  They were both made in the U.S.  Avoiding clothes made in sweat-shops is a high priority for me.

I gloated over my good fortune while stowing my new treasures behind the front seat of my Porsche.  This whole trip was about beauty and escaping my life, my job, and my empty nest.  Early this morning, I’d started my mini-quest by dressing in a short pink sweater dress with a wide black belt.  I put on my makeup, which I seldom wear and pulled my uncooperative hair into a bun in the back.  The shorter hair curled around my face attractively.  At first, I thought about wearing sensible shoes for walking, but a pair of cute purple heels begged me to take them out of the closet.  Perhaps they were aware of their role in the life-changing events of the day.  They were not high heels just the cutest little spiked purple pumps imaginable. They made me feel pretty.

When I lived near the Madison Valley, I visited this nursery often.  The tough plants, the trees, heathers and grasses lived in pots outside.  This particular Monday, I wanted to visit the inside plants, the sweet African violets, the bromeliads and orchids.  I considered them appropriate objects on a quest for beauty.