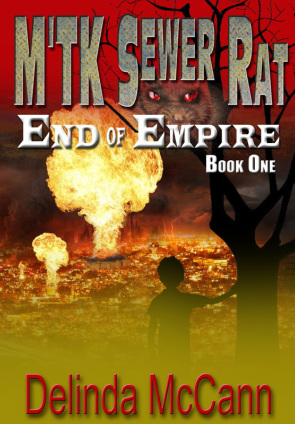 When young Jake Jaconovich lived with his parents in Wulfton, the industrial area of the city, Emperor Vanderholm had no idea that the person who would one day overturn his power and set the whole country on its tail lived and breathed the foul air of the slum.

Jake’s earliest memories are of the death of his sister and his beloved mama’s illness.  He remembers fleeing to the coast to live with Mama’s family.  He will never forget the smell of rotting fish in the northern fishing village.

Jake was five when his family returned to the city where Papa worked for the railroad.  They moved into an apartment in M’TK, the worst slum in the city.  Jake remembers how he soon became aware of other young children too drunk to play with him.  After he got beaten-up the first time, he began the study of martial arts under Mr. Wu, the most powerful crime boss in the city.

Jake’s life changes again when Emperor Vanderholm orders the army to burn M’TK.  Once again his family flees their home.  While Jake stood on a ridge outside the city and watched as the army burned the slum, Emperor Vanderholm was still unaware of Jake’s existence.   He could not know that his own actions intended to weaken owner of the railroad, Mr. Rouseff, have moved Jake one step closer to bringing about the demise of the empire.  The burning of M’TK brings Jake and his family to the attention of Mr. Rouseff, who will do anything to thwart the Vanderholms.

Jake grew up to become a charismatic young man.  After attending university under false credentials, he started his career as a lowly prosecutor, charging and fining drunks and prostitutes week after week.

The murder of a fisherman’s daughter in a northern village catapults Jake to the center of the political arena when the local fishermen ask Jake to prosecute the case against the emperor’s cousin Leon Fortenac.

The Fortenac case becomes the catalyst for change when the courts rule that the nation must adopt a constitution to reflect the true demographics of the country.

Where to Buy This Book

Autographed Paperback $17.00 - click here and send me your request,e-mail and addy

Jake is only six when this event happened.  He’d been studying martial arts with Mr. Wu for about four months.  He's learned one trick.

One evening, I came home from Mr. Wu’s a little later than usual.  I hurried because I liked to get home when Mama did.  I knew I was late and she would be in the apartment alone.  When I entered the building, I heard sounds of a scuffle on the second floor.  Suddenly, I heard Mama scream.  I felt as if a bucket of ice water had poured over me.  I knew nothing except that Mama screamed.  I ran up the stairs as fast as my short legs allowed.   A strange man stood there, holding Mama.  In my mind, I knew that the knife he held was my biggest problem.  I could smell a combination of urine, unwashed body, and alcohol emanating from him.  He looked greasy and dirty.

He turned when I yelled.  He sneered in the face of my outrage.  “What?  Who are you?”

I called him names that I heard on the street, a butt-fucker, ball-less, cock-less, a coward, a little girl.  I didn’t know what the all the names meant.  I knew they were very bad.

I knew we were in serious trouble.  “You don’t have enough cock to have fun.  No woman wants you.  That is why you have to use a knife.  I suppose you pick on little boys too?”  I wasn’t sure he heard me over my mother’s screams.

“Jake no!  Run away!”  Mama cried and tried to hold the knife away from her throat. She writhed back and forth to twist out of his grasp.

He leered down her neckline.

“You like little boys too?  Coward.”  I watched his face.   His pupils dilated and he squinted.  I’d found the word that got to him.  I discovered power in that word.  Something in my mind knew I could overpower him with one word. “Coward.  Afraid to pick on someone who can fight back—coward--has to pick on women--coward, dirty, filthy, cock-less coward.”

The man threw Mama against the wall.  He turned and lunged at me.

I held an image of Mr. Wu in my head.  My feet moved as they’d been trained.  They moved as Mr. Wu moved. The man came for me with his knife, but I wasn’t there.  As I’d been taught, I became the otter.  I moved into the man and slid underneath him and pushed myself onto my hands and knees.  I rolled him over the top of me with almost no effort on my part.  He fell head first down the stairs.

I reached for my mama then looked down the stairs to see the man sprawled on the floor two flights below us.  Bile rose up in the back of my throat as I witnessed the law of M’TK.  Nobody had come to help Mama.  Now when her assailant lay helplessly sprawled on the floor, people came out of their doors and swarmed over the body like rats.  Mama covered my eyes and took me into our apartment.